Book 12/100: The Wind in the Willows by Kenneth Grahame 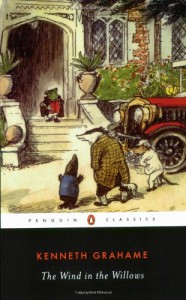 So, this book is one of those self-publishing "success stories" folks love to yammer on about.

When Grahame first wrote "The Wind in the Willows," no one wanted to publish it. He self-published it, it gained great popularity, now it's a classic, etc.

But all I could think as I read it was that I could see why no one wanted to publish it.

Talking animal stories are not really my cup of tea, but I've read plenty of them that were done well ([book:Watership Down|76620], [book:Bambi|739840], [book:Mrs. Frisby and the Rats of NIMH|20333080]). This one was more the type of story that reminds me why I don't generally go for talking animal stories. The world-building here was horrible -- we have anthropomorphic forest critters who wear clothes, ride horses, and drive cars, and yet we also have humans who interact with them and seem to be comparable in size? Not to mention one scene where a rabbit is described as an auxillary character, and another in which Mr. Toad EATS a rabbit stew. Isn't that basically like eating your neighbor? All said, I couldn't figure out WHY this story had to be told using animals at all. Or why it even needed to be told, come to that.

Because it had absolutely no plot. I guess you could say that the plot had something to do with Mr. Toad's "reformation" from a cad to a humble gentleman, but there is no real evidence that a true transformation has taken place at the end of the book, since Toad had put on airs of repentance in the past that never stuck. And then there are all sorts of scenes that have nothing to do with this plot or with any discernible subplot, such as one where Mole and Rat go looking for a missing otter -- this is the story that, apparently, is behind the novel's name, even though it seems pretty inconsequential to the greater story.

It's written well enough and can be charming in places, but it was one of those books that leaves me wondering what in the world all the fuss is about, and why it came to be so popular in the first place. I guess I'll go read some positive reviews now to see what the heck people see in this book.