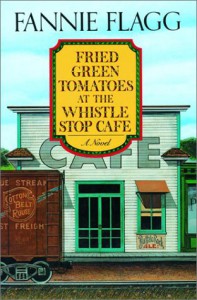 Although I knew that this book was beloved by many queer women, I always thought it was because a same-sex love story could be "read into" Idgie's and Ruth's friendship. I saw the movie as a kid and at the time accepted "friendship" as a believable explanation for the women's bond, and I expected the book to be similar. So I was surprised, pleasantly so, by how overtly queer the book is. There is no hedging around the issue that Ruth and Idgie are in love and are forging a romantic partnership that is much like the relationships of the opposite-sex, traditional couples around them. It is heartening to know that, even with this relationship at the heart of it, the book still managed to cruise the mainstream back in the mid-eighties.

The town of Whistlestop, Alabama, is a strange, surreal kind of place. On the one hand, it's refreshing that no one really seems to give a damn about whether Idgie and Ruth are lesbians and that they are universally accepted for who they are, just as the community accepts the eccentricities of the town's other residents. I would say that this book romanticizes small-town life -- there seems to be fairly minimal gossip; what gossip there is is not mean-spirited, good-natured hijinks and pranks abound, and ultimately the town's sense of allegiance to the community trumps all other concerns. But the book is not without its darkness -- the Ku Klux Klan is a real threat; black men are jailed for crimes they did not commit; one character is an especially egregious rapist and wife beater; and then, of course, there is [the murder and cannibalism], which gives the whole sweet veneer of the book a deliciously dark underbelly.

Still, I found myself ambivalent about the portrayal of Whistlestop. It almost seems to be something of a utopia: a place where blacks and whites are friends in the segregated south; a place where professionals don't charge for goods or services even in the grip of the depression; a place where spouses rib at each other but are generally happy with their lit; a place where a lesbian couple lives openly without any fear of harassment or worse. It's all a little hard to swallow for the realist in me, and it has me wondering about its overall purpose. Is this meant to be a sort of escapist reality, a glimpse into how the author (and others) wish the world could be? Is it only because it is seen primarily through the rose-colored glasses of 86-year-old Ginny, whose disposition seems to make her incapable of saying an unkind word about anyone? It makes me wonder whether Whistlestop was really what we are led to believe it is, or whether its portrayal in the book is the result of an old woman's loneliness, delusion, and revisionist history. Are we supposed to accept this idyllic place at face value, or are we meant to question the veracity of the perspective from which it comes to us?

The fact that the Whistlestop story is intertwined with middle-aged Evelyn's journey toward a feminist awakening and then self-acceptance also makes me wonder about whether we are being fed truth, or an inspirational fiction. It is this place that seems too good to be true, after all, that gives Evelyn a vision of the way her own life might change. Ginny sees something good, strong, and beautiful in Evelyn that she does not see in herself; might she similarly have seen more good in Whistlestop than what was actually there?

Because of this dichotomy, I actually felt more invested in the Evelyn storyline because her untapped anger, her dissatisfaction with her marriage and her life choices, her exploration of what she really believed all felt more real and credible to me. There were times when her story was a bit over the top, when things I knew I was supposed to find funny just struck me as annoying. In general, I didn't really buy into the "humor" in this book -- it was a little too quirky and quaint for my tastes and felt as though it were just trying too hard. But then, it's very seldom that humor in books really hits the right note with me.

Still, I can see why this book resonates with so many people. It offers a glimpse of community and solidarity that many of us long to believe is possible, but it also does not shy away from examining issues of racism and feminism -- topics that remain ever-relevant even if the presentation of them in Fried Green Tomatoes feels just a little bit dated.