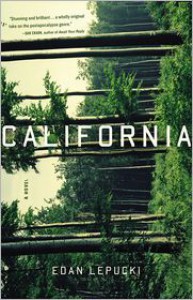 That was OK with me. I like science fiction and fantasy that veers toward the literary, and that is definitely what "California" has going on, using the setting as a backdrop to explore complex human relationships, particularly between the married couple protagonists and the wife's charismatic brother. Still, this was not the sort of "meditation on marriage" that I've heard other reviewers call it; something about Frida and Cal's relationship always felt a little bit flat to me -- I was never fully invested in it. I was far more invested in the relationship between Frida, Cal, and Mikey, the charismatic leader of the community they find themselves attempting to be a part of after they have lived on their own in the wilderness for a couple years.

Frida's pregnancy, the inciting incident that convinces her they need to seek a wider community, raised interesting questions about what it means to parent and to plan for a future in a world that is dangerous and uncertain. The resolution to this question was not wholly satisfying. I also could have done with stronger world-building -- I got a sense of what the world was like post-apocalypse, but not exactly what had precipitated it, except something about an oil crisis? But I guess that's par for the course in "literary" science fiction -- it tends to leave the hardcore world-building to the hardcore genre writers.

So that's a fair amount of criticism for a book that I ultimately still gave four stars, but the book, the world, and the character dynamics did hold my interest from beginning to end. Wasn't thrilled with the narration, though, so probably wouldn't recommend the audio version.