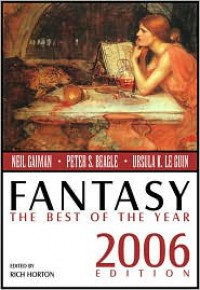 Well, it took me almost nine years to get there, but now I am all up to speed on which fantasy was hot in 2006!

I don't often read short story collections, so this was a nice change of pace for me. I liked the low-level commitment, and the fact that if I didn't like one story, it wouldn't take long for it to be replaced by another. Like all anthologies, I really liked some stories, felt indifferent to others, and found still others insufferable. I marked just under half the stories in this collection as ones that I "liked," and I page-flagged them all so that my husband can read the abridged version and not have to wade through the less-enjoyable stories.

The short story can be a difficult genre for a fantasy writer; there isn't much time for world-building, yet world-building is essential in a world that is different than our own. Because of that, several of the stories left me feeling a little disoriented, and as if I never really did get a handle on what was going on. Also, the flavor of the stories was quite different than I was expecting. A friend bought me this book because it has the "sequel" to The Last Unicorn, "Two Hearts," in it. "Two Hearts" is traditional fantasy, with a prince and villages and a griffin and magician. I expected a lot more traditional fantasy, but many of the stories were urban fantasy and/or paranormal. Perhaps these genres were emerging as new and "edgy" in 2006, but today the market is so saturated that stories with paranormal tropes almost instantly turn me off. So I wish there hadn't been so much of that here. I was a little more forgiving of the more "science-fiction-y" stories in the bunch, as none of them seemed to rely enough on hard science to pull them completely out of the fantasy realm.

It was a worthwhile read for the 8 stories that I really loved, although it took me much longer to get through than I expected. I think it's because of the extra time needed to re-orient myself to a new world with the start of each chapter.