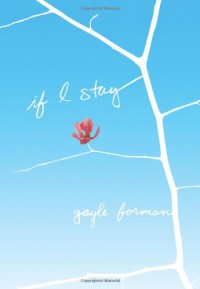 So, this is one of those books that, like The Fault in Our Stars, I conscientiously avoided even after it gained tons of good reviews and popularity, spawned a couple sequels/companion novels, and got adapted into a movie. I finally caved and read it for my Book Club, and discovered that I was pretty much totally right to be avoiding it all this time.

Let me start by saying that I think Gayle Forman is a good writer -- I read I Was Here and really liked it, and I'd be open to reading other work by her. But this book pretty much does exactly what I feared it would, which is to romanticize the tragedy of losing one's family.

The whole story basically moves through a series of flashbacks Mia reflects upon while she is in a coma as she tries to decide whether to slip away and join her dead family or "stay" -- go on living despite her monumental loss. Everything struck me as trying a little too hard to me -- her family, who was supposed to be hip and quirky and unique, felt disingenuous and almost "too" cool to me, like as a reader I was supposed to just fall in love with them. I didn't. I kept waiting for something to actually HAPPEN (even if it happened in flashbacks), but the only time the tension really seemed to ratchet up was when Mia described the tension that had entered her relationship with her boyfriend when she started considering moving across the country for school. Still, her boyfriend ends up being pivotal in her decision, and although the book acknowledges that high school relationships often don't last, it also leads by example in making this relationship the pinnacle of what Mia has "left," placing even MORE pressure on teens' romantic expectations than what is already there. It just proves that I'm turning into an old fogey when I read books like this and roll my eyes and think, "It's not like you're going to stay together, anyway!"

One of the other things that bothered me about this book was that it was clearly supposed to be this exploration of what makes life beautiful even when it feels like you've lost it all, but I got the sense that the author had never ACTUALLY had to face this kind of loss or trauma and thus didn't really have the right to moralize about it. And the remaining, "living" characters, who also loved Mia's brother and parents, did not seem to be grieving their loss. Her grandparents, for example, seemed wholly focused on her recovery even though they had just been dealt the blow of losing a child -- yet, it was as if the actual deaths didn't even register with the other characters, they were so focused on Mia.

Also, was it REALLY necessary to go into such pornographic detail about the aftermath of the accident? Those images are gonna stay with me for a long time, having lived through a similar car accident, and the way they were written about seemed almost irresponsible to me, considering how many people in real life have been traumatized by similar experiences. Have fun getting re-traumatized reading a book that's not really worth it!

It all felt like a pretty facile treatment of an incredibly heavy topic, and I knew something had gone wrong when a book about all this death didn't bring me to tears once. And I'm not the most stoic reader, either -- I just couldn't BELIEVE in Mia's story and thus what she chose didn't really matter to me. And of course, the tension is lost from the get-go because it's pretty obvious what choice she's going to end up making.

A note on the movie: Gayle Foreman was involved in its production and it follows the book meticulously, with the exception that is erases all signs of Kim's Jewishness (thanks for the racism, Hollywood!). The family is somewhat more likable on film because they feel more believable when real, living, breathing actors are giving them life. I also appreciated that the actor playing Mia looks like an actual teenager and not like she's 30. So, it's a great movie if you liked the book and want a faithful rendition. If you didn't care much for the book, you'll probably feel like you've been duped into watching something on Lifetime or the Hallmark movie channel -- neither of which are first choices for me. Still, the upside of this is that it did not show the car accident in the same nauseatingly excruciating detail as in the book.