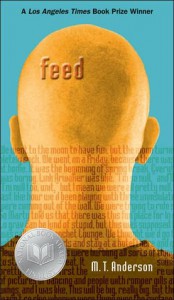 This seminal teen dystopia has been on my TBR forever (maybe since it was published?) and thanks to my book club I finally got it checked off!

I always find it a little refreshing to read "old school" teen dystopias, before the formula of singular teen who realizes the evil of "the system" and vows to overthrow it in three books came along. The best dystopias are always about social commentary, not movie franchising rights, and this one has a lot relevant to say in the realm of social commentary.

This was published in the early 2000s, after the Internet had become ubiquitous and right on the edge of web 2.0 when everyone became content creators. The way that technology has totally infiltrated everyone's life and the way that advertisers "feed" into everything people do is, of course, quite prescient, although perhaps what is missing is the ability for humans to interact back and create content in a way that goes beyond their purchasing power. Still, I can't help but think of this book when I noticed that every third post on my Facebook feed these days is an ad ... usually one that is disturbingly on-target.

Titus is not a very likeable character, and he is so enmeshed in the system that he doesn't see its pitfalls. His love interest, Violet, is somewhat outside the system and so calls it into question a bit more, but she fortunately stops just short of being a manic pixie dream girl. Although Titus's behavior, especially his inability to connect with her on a real, meaningful level when she needs him to, is incredibly frustrating, I also found it to be totally spot-on believable for someone who had grown up in this culture with these values.

I really wanted to know more about the larger society in which Titus lived, but because he was so wrapped up in his own pursuit of entertainment, distraction, and consumerism, we only got glimpses of these things as they stayed on the periphery of his consciousness. Still, a chilling and powerful cautionary tale that is made stronger by not having a single character beat us over the head with how "wrong" the society is. Thanks, M.T. Anderson, for delivering a dystopia that invites the reader to think for herself.