Book 33/100: The Amulet of Samarkand by Jonathan Stroud 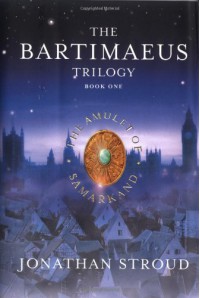 I just wasn't as enamored of this book as a lot of other people seem to be.

While I found Bartimaeus' narration more compelling than Nathan's chapters, I didn't really find myself "getting behind" either character. I don't really need characters to be "likeable" in the books I read, but I kept wondering exactly who or what I should be rooting for in this book, what should keep me reading. Was I supposed to want Nathan to succeed in his endeavors, even though he was kind of a jerk to Bartimaeus? I kept thinking the book was probably trying to be something of a "buddy comedy" where Bartimaeus and Nathan were supposed to start out loathing each other but would eventually come to be reluctant comrades, and that perhaps THAT was the outcome we were supposed to be pulling for. But that aspect of the story never really seemed to materialize, either.

So I'm sorry to say that my mind wandered a fair amount during this book. It took me a long time to figure out the era it was taking place in, and I eventually determined it's in a sort of alternate present-day since a laptop was mentioned at some point. And although the magic system and political set-up and hints of a coming revolution were all interesting, it also felt somewhat muddled to me. It did remind me of a children's version of "Jonathon Strange and Mr. Norrell," and it was well written, but I probably won't be reading further into the series.