Book 69/100: Confessions of an Ugly Stepsister by Gregory Maguire 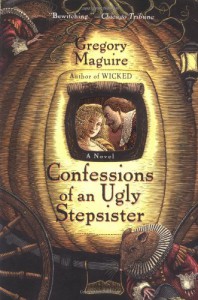 This is one of the best Maguire books I've read, right up there with the first couple Oz retellings (I only read the first two but heard the later ones weren't as good.)

Similar to "Mirror, Mirror," Maguire places the story of Cinderella within a firm historical time and place -- Holland at the start of the tulip trade. But unlike "Mirror, Mirror," it doesn't have the strange conflagration of fantasy and historical realism that didn't quite work for me. "Confessions" could be read as a straight historical retelling with the characters holding onto some "magical" belief systems, or it could be read as a very subtle fantasy rooted in a historical setting. This ambiguity worked for me.

The stepmother and stepsisters, as well as the "Cinderella" character, are all vividly drawn. The stepmother comes across as both wicked and sympathetic -- surely not an easy feat to accomplish. As soon as I got over my hangup that it felt as if this story should be told first-person (it's CONFESSIONS, after all!), I enjoyed the masterful and detailed writing -- although the level of detail and the change the characters underwent in the course of the story made it feel as though it should have taken place over a longer span of time than it actually did. Still, that was a minor quibble -- and the minor "twist" at the end really worked for me.

The retelling genre teems with Cinderella stories, but this one moves to the front of the line for me.
Historical fiction Fairy Tales retellings
Tweet