Wanted: A Speaker for the Dead As my husband drove me to work the Monday after his father died, I said, “I wish we had a Speaker for the Dead for your dad.”

He said, “I was thinking the exact same thing.”

In Orson Scott Card’s novel of the same name, the second in the Ender’s saga, a Speaker for the Dead is a person whose job is to carefully, compassionately, and objectively examine the life of someone who has passed away, reconstructing an honest picture of the deceased that is shared at the funeral. The Speaker is a professional and an outsider, not someone who knew the deceased in life. The idea is that the Speaker may be able to find beauty and meaning in ways that those closest to the dead may not be able to and to find compassion even for those who may not have led exemplary lives. [As a side note, Orson Scott Card’s Speaker for the Dead would have his work cut out for him attempting to make sense of OSC’s early fiction’s messages of inclusivity and his later vitriol against the GLBT community, which is explored thoughtfully by the fine gentlemen of Overdue if you’re interested in hearing more.]

It’s been over 10 years since I read Speaker, so I’m a little fuzzy on the details, but what I do remember is that in the book Ender had to wrestle to find compassion and meaning in the life of a man that, to most of the world, looked like an abusive no-account.

As we reflected on my father-in-law’s life, collecting stories for the minister and for the obituary, I longed for someone who could make sense of a complicated life that had ended, and the complicated ripples that remained in the lives of his children, his siblings, and the others who were close to him.

Following an unspoken rule that we do not speak ill of the dead, his children shared stories and happy memories of their father’s hard work, compassion, generous nature, sense of humor, and resourcefulness. Choosing “The Good Samaritan” as the Gospel reading for the funeral, they talked about how he could never turn away anyone who needed help, often allowing people who were down on their luck to live in his home when they might have ended up on the street otherwise. After one glowing story from his daughter, his ex-wife commented, “I don’t remember your father that way, but I’m glad that you do.”

And therein lies the truth, that a single man can be so many different things to different people, and so many different things even to one person. Every beautiful story and memory told about him was true. But what was also true was the unspoken or the tactfully avoided, the vices that were no small part of the man’s life, that in fact loomed large enough to cost him his long marriage to a good woman and the mother of his children.

How nice if someone else could come in and make sense of it all.

But while our shared literary reference provided us some comfort and a shorthand language in which to communicate about my father-in-law’s life and death in the midst of a hellish, heartbreaking week, we knew that no Speaker was available to take this burden from his family’s shoulders.

At a meeting with our pastor, my husband talked openly about some of his father’s shortcomings. The pastor said diplomatically, “I won’t mention any of that.”

The beauty of a Speaker for the Dead, though, is that he WOULD have mentioned that, the good and the bad, and somehow made it all okay, all beautiful, all a piece of one rich and complex and completed life.

After the eulogy, the pastor invited those gathered to share stories about my husband’s father. Not surprisingly, a case of Midwestern shyness kept a room full of 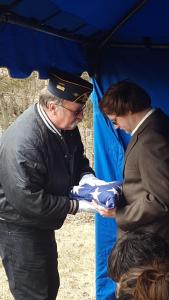 The pastor pressed on. “One word to describe him,” he suggested.

“Generous,” said someone else.

A smattering of complimentary adjectives and agreements followed, until his sister blurted out, “Ornery!” Amidst the knowing laughter, his daughter muttered, “Stubborn.”

The pastor said, “Ah, now the truth comes out!”

Of course, the truth was in the hearts of those gathered all along. And while no one person alone could find a way to articulate the sometimes muddled tapestry that had been the man’s life the way that a Speaker for the Dead might have done, a room full of those who loved and knew him best turned out to be pretty adequate Speakers after all.